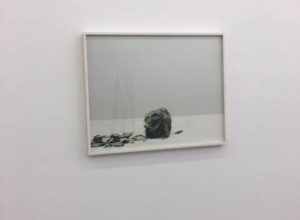 Its been a while since we’ve seen an art exhibition attempt to update the 17th century Dutch painting category “vanitas.” Not that contemporary culture lacks any of its signifiers. In fact, reminders of death, the slipping away of time, and the meaninglessness of earthly pleasures are an unrelenting presence in today’s society, thanks in part to the indulgence empowered by the internet, and the media’s penchant for disaster and spectacle. To it’s credit, the recent five person show Vanitas at Kate Werble mercifully bypasses the explicit symbolism typical of the memento mori (imagine a show filled with guns, Kardashians, and brunch pics) in favor of a vibier wink at the mortal coil. The show focuses intently on surface and material, and the sensuousness that results inclines it toward a distinctly feminine (and decidedly modern) iteration of the classic theme.

Visitors enter the front gallery to a triad of works by Sarah E. Wood. Untitled (Suburban Shape No. 1-3), 2018, is an assembly of reeds balanced precariously around the room, their long bamboo legs wrapped together with metal, and smeared over with plaster. Affixed to a nearby wall is Ivana Basic’s Breath Seeps Through Her Tightly Closed Mouth, 2018, a metal ring choking a pink sphere, who’s bloated form becomes a long narrow drip as it passes through the grasp of the hardware. This looks onto Little Leaves, 2016, by Melanie Schiff, a leafy form photographed in late-stage decay. Ahead, a long length of pink silk drapes languidly from the ceiling. There is a sound murmuring from behind its folds: a medley of haunted howls and rhythmic clanking that over the next minute reveals itself to be musical, and curiously familiar. Bells and beats suggest fragments of a pop song. Anticipating our next question, the title reads: All That She Wants, 2017.

From this moment on, the lyrics to Ace of Base’s chart-topping 1992 single “All That She Wants” are lodged in your mind, fusing with the disjointed audio of Sofia Cordova’s piece by the same name. This is a song about a woman who’s insatiable hunger for lovers prevents her from settling down, despite the supposedly lonely life that she leads. She’s a tragic figure, perpetually seeking new thrills, racking up new kills, and always gone tomorrow. The song, like the show, is saccharine and sad, and it provides a fitting soundtrack for the second half of the exhibition.

In the rear room, we are met with Basic’s fleshy, infirmed sculptures and Sofia Cordova’s second piece, Dame La Mano Paloma, Para Subir a Tu Nido (Give Me Your Hand, Dove, So That I May Climb Into Your Nest), 2017, a pink taxidermied dove perched atop a truncated Corinthian column. Another photograph, Silk, 2018, by Melanie Schiff faintly displays a set of burning candles, and its neighbor, Break, 2017, by Lui Shtini, is an abstraction of composited shapes and textures made from enamel, oil, pastel and graphite on dibond.

It may be worth noting at this point that four out of five of the artists are female. The sensuality of the show is really the whole point, and whether that’s meant to evoke femininity or not, it does. Frankly, it’s what makes it feel current, even critical. If we consider the extent to which a woman’s life is marked indelibly by materialism, birth and reproduction, aging and youth, and our ever advancing position in the cycle of life (not to mention entire industries aimed at women’s psyches in pursuit of tapping their purchasing power), then it’s obvious how well the vanitas genre lends itself to the female condition – at least the American one. Feminist or not, any visitor to this exhibition can appreciate the gesture of recasting a canonical, male dominated morality genre in such a light that gives some small insight into the violence and resilience of being a woman. 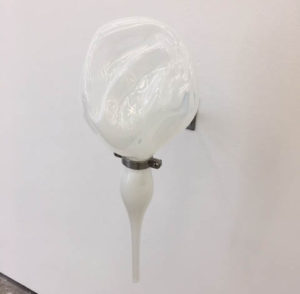