For their second solo exhibition at 47 Canal, Amy Lien and Enzo Camacho present Mother Holding Taobao Child, their latest in an eight year collaborative practice that concerns itself with issues of displacement and migration, and the subcultural mutations that emerge under global capitalism. Their current study turns its sights on e-trade giant Taobao, and consists primarily of three semi-assembled components of a wooden bunk bed displayed in subdivided areas of the gallery, and a video work projected on the rear wall. The wood furniture parts are adorned with electronic devices and backlit ink and rice paper drawings sourced from imagery in the video, accoutrements that provide material texture to what would otherwise be a slightly underwhelming presentation of Chinese consumables.

For anyone unfamiliar with the particulars of global e-trade, Taobao is something like the Chinese eBay: a vast online marketplace populated by vendors specializing in consumer-to-consumer exchange. Soon after its launch in 2003, Taobao unexpectedly found its way into the resourceful hands of impoverished remote villagers, who, looking for ways to survive in the face of rural scarcity, began to collectively engage in e-commerce via Taobao.com. The outcome of this was an unprecedented cultural phenomenon known as Taobao towns, which quickly propagated throughout the countryside. Now promoted by the Chinese government in a nationwide campaign to end poverty, these towns manufacture anything from stage costumes to electronics, or in the context of Mother Holding Taobao Child, household goods like the at-home assembly wooden bed on view throughout the gallery. 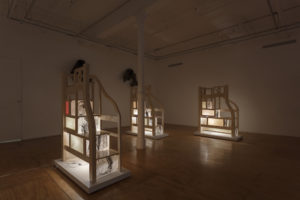 The “Mother-Child bed,” one of the most popular objects to come out of the Taobao villages, is exactly what it sounds like: a bunk bed for a mother and child pair, designed so that a mother can sleep beneath her son or daughter. Issued during China’s one child per family policy, the bed is loaded with reference to the claustrophobic living conditions typical to urban environments, the economic strain felt by families most affected by the products of overpopulation, and the pressurized subjectivity of the Chinese only child. No surprise then that the Mother-Child bed would serve as the physical signifier for the Taobao town phenomena and its socio-emotional implications.

Mother-Child Bed (Space is the mother) is the bed we encounter first, piled on by plastic bundles containing inflatable dolphins, security blankets, dried mushrooms, a bath mat, a bucket, rice noodles, dried fish maw, a poncho, lotus leaves, candied winter melon, an aluminum platter, and 360 Degree Panoramic WIFI Camera Light Bulbs. A seven-minute video projection loops onto the un-mattressed base. Pushing past the object as mere signage, Camacho and Lien attempt here to evoke the mess of a living environment – one which ends up highlighting the uncomfortable spatial contrast between the sleek contemporary art temple and the compact clutter experienced by the families of economic migration. Additionally, the text supplies us with an important thread about the friction between function and the performing of function that pinpoints the the video, titled Mother Holding Taobao Child, displayed on the rear wall, as the true contextual meat of the exhibition

.In the video, a low-budget photoshoot is taking place in an urban city in China with two child models, their respective mothers who are on hand to coach them, and a male photographer, who is the father of one of the children. We learn that the photo-studio specializes in producing stock images of commodity items for circulation online, assumedly on Taobao. In one part of the film, the young boy is the subject of the shoot, and his prop is a children’s smiley face backpack. He is instructed to pose and play with the bag, but to do so toward the camera, and within the limits of the frame, to laugh and smile, but not move around too much or throw around the toy. In actuality, he is not being instructed to play, but rather to perform play – oppositional directives that psychologically create a situation called a double bind. 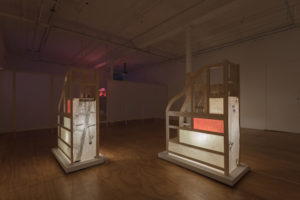 The artists wish to center the double bind in this body of work, drawing references to parental relationships found in conglomerates, work relationships and mentorships, and the difficulty in creating legible imagery from chaotic contexts. Perhaps they mean to self reference the imagery they themselves have created out of confusing contexts, and that imagery’s dependence on the rich narrative told by the exhibition text. It could be that the greatest double bind at work in the show is that of the creative labor being performed by every participating party in the production channel: the photographer, protecting his child by exploiting his child, the Taobao towners starting individual businesses in a somehow communist but capitalist regime, he visitors as consumers / decoders, the children, the artists, and so on. In this ring of labor, communication has ample opportunities to break down, creating possibilities for unusual thinking, creativity and the potential schizophrenic turn.